Lanzarote is one of the Canary Islands. It has a delightful coastline consisting largely of sandy beaches and a more mountainous interior which is a result of the island's volcanic geology. Many cruises stop off at Lanzarote and although the glorious weather and charming local people are attractions enough in their own right, there are many great excursions available which give visitors the chance to see more of the island. 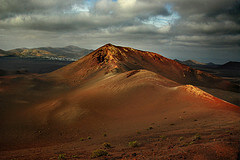 The volcanoes, the Montañas del Fuego, of Lanzarote were once the bane of the locals' existence but are now one of the island's most fascinating features. They are not all extinct and in their dormancy the awesome power beneath the Earth's crust can still be witnessed as part of a tour led by experienced and knowledgeable guides. In among the great lava cinders and volcano cones, the eerie lunar landscape is sure to stick with you long after you've left. Further down the volcano, it is clear to see how the locals have made the natural features of the island work for them, with the rich soil allowing vineyards to flourish, though the vines have to be protected by curving stone walls. 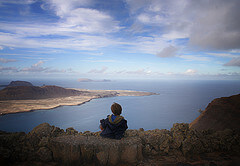 A visit to the north of Lanzarote is a must for any visitor to the island. The town of Teguise is a particular attraction as a result of its historic architecture and laid-back atmosphere which makes it a popular retreat among the local people as well as a draw for tourists. Those seeking a taste of natural beauty can't go wrong with the viewpoints at Haria and Mirador del Rio the former offering a view over the Valley of a Thousand Palms and the latter granting, on a clear day, a glimpse of the island of La Graciosa. 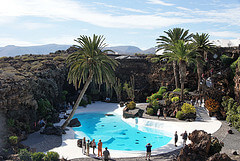 Cesar Manrique was an artist born in the Arrecife region of Lanzarote whose work can be seen throughout his native landscape and is well worth an excursion to appreciate it in full. Perhaps one of his most famous developments is the Jameos del Agua   a vast roofless cave with a perfectly transparent pool at the bottom inhabited by unique tiny white blind crabs. It also serves as a sometime party venue. Elsewhere, Manrique's house is the epitome of his artistic style   partly submerged in volcanic bubbles and decorated in jet black and gold. It has now become a gallery for much of his work.

A Taste of Lanzarote

As a result of the volcanic soil, vineyards flourish on Lanzarote and any wine fan would be foolish to miss out on tasting the local produce while on the island. An excursion here will involve visiting three of the best Bodegas on Lanzarote, each of which has three different wines for visitors to sample. Muscat and Malvasia are among the most popular varieties on offer. The Bodega El Grifo is the oldest winery in the Canaries and one of the oldest in Spain, complete with a museum dedicated to the world of wine.

Passengers on any cruise which stops off at Lanzarote will not be disappointed. Whether you’d rather sample the local vintages, explore the startling volcanic landscape or appreciate art which crosses the boundaries between culture and geography, there is something for everyone. Although sunbathing on the beach may seem appealing enough, no trip to Lanzarote is complete without an excursion to really get a feel of the island.