The Ottoman town of Safranbolu, Turkey 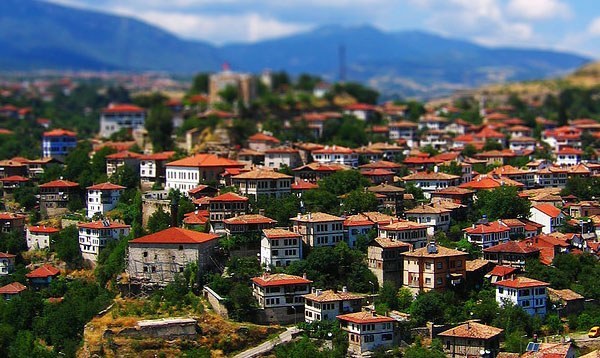 For more than seven centuries the Ottoman Empire ruled most of the Mediterranean nations extending from the Middle East to Spain, North Africa and the parts of Eastern Europe now known as the Balkans. The Ottoman Dynasty ended in 1923. Today the nation of Turkey is still a vast land, an old land, and a modern land. A land giant and a land diverse. Her capital is no longer called Constantinople, but Istanbul, but forever the Ottoman Empire can be best seen at Safranbolu.

Seven centuries ago the Caliph would have instructed his people or visitors to rest at Safranbolu. Safranbolu, located near the Balkan Sea, is actually two cities, the old and the new. Once a capital of trade, once the leading producer of the rare spic, and dye, saffron, the old Safranbolu offers all visitors a chance to rest as directed by the Caliph. For rest is for the mind if saffron is for the soul, and the Caliph likened the bright dyes made of saffron to spring. Only in the Old Town of Carsi, and the New Town, Baglar, can one rest in spring and enjoy fall as well. In Carsi you may enjoy the rich history of the area dating from when the ancient Greeks called this densely forested area Paphlagonia.

How could anyone rest enjoying historical sites preserved since Grecian times, castles of those remembered as Germanicopolis, mosques dated to the many visits of Mohamed, amphitheaters and aqueducts built by the Romans?

In Old Town you must enjoy the architecture of homes and houses dating back centuries. You must walk the cobbled streets to enjoy the wares of local merchants and farmers. The feel of great textiles and the weight of crafted woods of the region can be found in the bazaars. The carefully crafted works of tin and copper remind of times gone and times to come. As if the Caliph had just this in mind when explaining that in Safranbolu the world never ends. The delicate foods of the Turk and the Ottoman are served in both the old and the new. The “profound” delicacy of e yaprak helvasi, which is layers of helva with walnuts, is a treat for those trekking, those shopping or those visiting one of the more than twenty five museums in the area. No where but in Safranbolu can it be said that you can rest knowing the saffron is growing?

Air service is available to Ankara, Turkey's capital city, with bus service from Karabuk and shuttles offer local service to Safranbolu. Or you can travel by tail to Karabuk and use the daily shuttle services to arrive at one of many hotels and guest houses that offer great accommodations for those on a budget or those wanting to enjoy the luxury of the hotels and guest houses in Baglar. Go to Safranbolu to find just what the Caliph said you need”¦ a rest for the ages.