The Pantheon in Rome 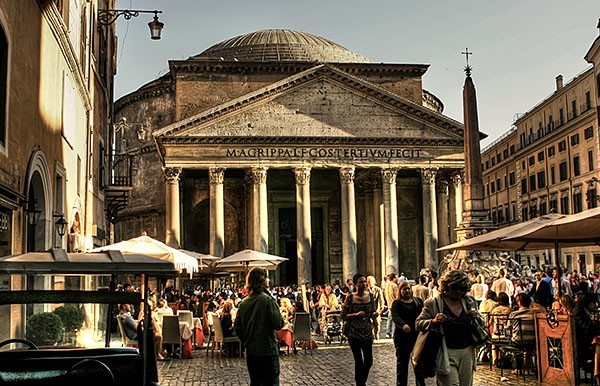 No trip to Rome would be complete without a visit to Pantheon. Because it is such a popular tourist destination, you will have to plan to deal with crowds on your visit, but pictures just do not do it justice. The Pantheon, lit from below on a summer night, is something you just have to experience for yourself. The opulence of the domed ceiling viewed from inside is enough to take your breath away.

The Pantheon is the oldest intact structure in Rome. It is an amazing feat of ancient engineering. It was the largest concrete structure in the world until the 20th century. The Pantheon was admired by Michelangelo for its beauty and its perfect proportions.

Originally a pagan temple, the Pantheon was turned over to the Catholic Church by Byzantine Emperor Phocas in 609 B.C. It became the Church of Santa Maria and Martyres. This consecration most likely saved the building from the pillaging and decay that destroyed most other ancient temples. The Church of Santa Maria and Martyres is still an active church which celebrates mass and is a popular venue for weddings.

Due to the narrow streets buses do not come all the way to the Pantheon. You will have to get off a few blocks away and walk. If you start at the Spanish Steps, you can stroll past the Trevi Fountain, visit the Pantheon, and end at the Piazza Navona.

While it can be enjoyable exploring and discovering Rome on your own, a good guide book is a must. If you are truly interested in the history and architecture you may want to take a guided walking tour. There are many good ones available.

This is great. I've recently started noticing/following travel blogs more so the photos here are a little surreal.This is an industry that I'd love to be involved in. It seems like a fun field.

Thanks Thomas. The photo quite caught my eye while browsing through Flickr. Mostly you just see the facade of the Pantheon, and it's frankly boring compared to much of Rome's architecture. With context like this, it comes alive better.

I must say, that is one of the most evocative photographs of the Pantheon, and the Piazza della Rotonda, I have seen. The lighting and bustle of crowds are both wonderful. As an archaeologist I have to point out the Egyptian obelisk, bought to Rome in 80 AD by Emperor Domitian (although not placed in front of the Pantheon until 1711). I recommend a great book by Susan Sorek, 'The Emperor's Needles'. Rome has more standing Egyptian obelisks than anywhere else, including all of Egypt.