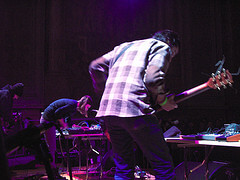 This remarkable festival opened to visitors in the year 2000, located in the historic Italian city of Bologna, which also in the same year was named as one of the nine European Capital of Culture cities chosen by the EU council of ministers, is a wonder for the mind. By playing host to a huge range of artwork, demonstrations and exhibitions that explore the world of the audio-visual arts to its limits, the festival aims to reach out to both traditional and contemporary artists by inspiring their creativity to understand and connect with the world in new ways.

Of course the festival isn’t just for those active participants, members of the public are invited to join in and become part of the festival in all of its forms. Featuring some of the most talented visual artists of their generation, the exhibitions are a sight to behold and will often leave you speechless.

Along with demonstrations and technical explanations of all aspects of the visual media world, including live video, modern cinema and budget movie workshops for those studying or working in the industry, the Netmage Festival is also aimed at people making home movies, artistic and creative ways to create certain looks within video media as well as research stands and demonstrations of the technology used to create the works itself.

The festival also features live visual performances of working media groups, live shoots and examples of working practices on a movie set, as well as tips and displays of multi-media artists as they work to explain the latest in both technologies such as touch-screen interactive artistic tools, including many first hand chances to test these creative tools of the future out first hand.

Along with the fantastic range of informative and entertaining video arts scene on display, the Netmage Festival also features some of the world’s most skilled audio artists. With a host of audio performances from electronic music all the way to symphony concerts, the sheer scale of audio-visual treats on offer is enough to dazzle.

The festival also explores the world of sight and sound in the most creative ways. With exhibitions and talks about what visual art is and how the perception of the world around demands that we try to replicate what we see for others to share, you can get the most in-depth and meaningful conversations with noted peers in the world of the visual arts, and come away feeling refreshed, renewed and inspired to create and explore for yourself.

The Netmage Festival is one of the contemporary wonders of the new world. By exploring the domain of our most important senses, the festival speaks volumes of the world that we live in. From traditional record players to the latest haptic displays capable of making completely man-made sounds to share with others, the range of audio excellence on display is an experience you’ll never forget, and to visual art that takes our mind to places we had never explored before, The festival is a thrilling and exceptional display of contemporary arts that is sure to challenge, entertain, and inspire a whole generation for years to come.