Berlin is a very green city, with green spaces dotted all over it. Berlin parks range from tiny green oasis around fountain on street corners to massive leisure parks like Grunewald, which really is a sizeable forest on the south west edge of Berlin. These parks are popular with both Berlin tourists and residents: 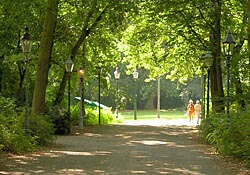 It doesn’t get more “Berlin” than Tiergarten, Animal Garden in English, a massive park complete with a castle and zoo. Tiergarten’s castle, Schloss Friedrichsfielde, was built in 1695 and restored in the 70’s. The zoo now houses more than 14,000 animals of nearly 4,000 species living in open habitats. They range from the very common to rarities like wild horses and Oryx antelopes. The zoo opened in 1954, when parts of Schloss Friedrichsfelde was actually used to house some animals!

Tiergarten’s 630 acres were originally the hounting grounds for royalty, but nowadays officials would take a very grim view on hunting in the park, as would the zoo keepers. However, travel photographers are recommended to go chasing some great vacation photos here as the park is full of marble sculptures, 14 miles of trails, beautiful flower gardens, great old trees, a number of canals, and a lake in the park’s south western part near the zoo. You can rent a boat and row for a while on the lake.

For more leisurely pursuits, there’s a beer garden and a café. If you want to relax even more, go ahead and sunbathe. There’s even a nudist section set aside in a secluded part of the park!

Near the 226 feet high Victory Column (Siegessäule), you’ll find the World Culture Center as well. Admission to the park is free, and it’s open 24 hours every day.

Located in the Tiergarden, Berlin's Zoologischer Garten is the world's largest zoo holding more than 14,000 animals from some 4,000 species. The Zoologischer Garten, which was completed in 1841 to the design of Peter Joseph Lenné (who also designed the Tierpark), came into being after zoologist Martin Heinrich Lichtenstein had persuaded Friedrich Wilhelim IV to donating the grounds of his pheasantry.

During WWII, the zoo was nearly completely destroyed, but it was rebuilt after the war and this time improved so the animals' habitats recreated the natural environment as much as possible. Thanks to this, the zoo has a very successful breeding program with some of the highest success numbers for endangered species in the world.

The main entrance to the zoo is through a picturesque Asian-style Elefanentor (Elephant Gate). Next door is a large aquarium center, with an impressive collection of fish and also some reptiles.

The gardens are open daily, check the website for the hours when you're wanting to visit. 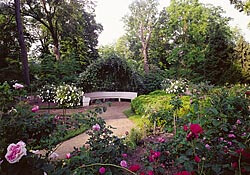 Pfaueninsel, or Peacock Island in English, is a typical English decorative garden designed by Peter Lenné in the early 1800’s. The gardens cover the whole of this small island, which in turn surrounds the palace known as Schloss Pfaueninsel. Built in 1794 by the Prussian king, Friedrich Wilhelm II, for his mistress Wilhemine von Lichtenau, Schloss Pfaueninsel misleadingly looks like an old ruin. However, the king built the palace to look this way as a romantic fancy. In fact, the whole of the gardens and castle is highly romantic.

Pfaueninsel is a popular summer hideaway in Berlin, and can also be reached by a ferry. The gardens are open daily from the morning to sunset, while Schloss Pfaueninsel opens between April and October between 10 am and 5 pm. Closed Mondays.

The Müggelsee is the greatest lake in Berlin and lies at the end of a big recreation area, that ranges from Treptower Park over Plänterwald till the Müggelberge. The area is perfect for walks, cycling, or swimming. 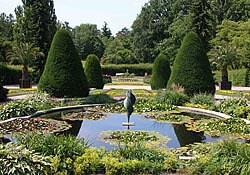 Spread over 108 acres, the Botanical Garden has several huge hothouses, 16 greenhouses, and more than 20,000 plant species from all over the world. Each of the greenhouses – including the Large Tropical House, the Victoria House, the Mediterranean House, the Cactus House and the Orchid House – holds exotic plants from a different climate region. There’s also a Botanical Museum that gives plenty of scientific background to the plants in the Botanical Garden.

Berlin’s Botanical Gardens is a popular destination for Berliners during the summer months. Because there’s a small entry fee to the gardens, they tend to be much quieter than the city parks, which can become quite busy on sunny days. The carefully landscaped gardens is a peaceful place to go for a walk. The gardens are open every day from 9am to sunset.

During June, July, and August, the Botanical Gardens offer a musical program on Fridays. These concerts take place outdoors in a sheltered area between some of the main greenhouses. When it rains, the performance is relocated into one of the greenhouses and visitors get the benefit of hearing music set among tropical plants and with the added pleasure of rain drops hitting the glass roof fo the greenhouse. 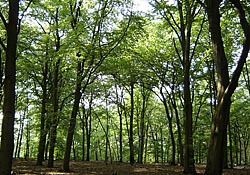 The large expanse of woodlands on Berlin’s south west corner is Grunewald. Bordered on the western side by River Havel, there are paths criss-crossing the forest, a number of lakes, and the 180 ft Grunewaldturm Tower. Built in the tail end of the 19th century to memorialize Kaiser Wilhelm I, it now houses a restaurant with views over one of Grunewald’s lakes.

A lodge in the forest hosts a small museum with Dutch and German paintings, antique furniture, and a separate building with a small hunting museum.

The forest is a wildlife reserve for Berlin, and is very much a living forest. So joggers and dog walkers are likely to come across animals while exploring the largest green space in Berlin.

Gardens of the World in the Marzahn Recreational Park 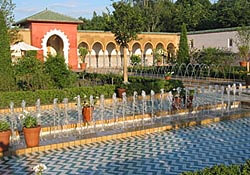 The Gardens of the World in the Marzahn Recreational Park offer fascinating insights into exotic horticulture. Visitors are invited to discover authentic Chinese gardening the Chinese Garden of the Reclaimed Moon with an original teahouse. The Japanese Garden of Confluent Water has typical plants in a lovely composition. The Balinese Garden of the three Harmonies presents in addition to exotic plants a typical housing. There are also an Oriental Garden, a Korean Garden, an Italian Renaissance garden and an English maze.

The Marzahn Recreational Park is located in the Marzahn-Hellersdorf district of Berlin. There's a 3 Euro admission charge (May 2009). This is a mixed-use park where you are likely to see young and old taking a leisurely stroll. There are also several play areas for children. In the center of the park is a fairly high tree-covered hill with a wide path following a snail-like trail to the top, where you get an interesting view of the city. On the grounds are also an open-air stage for theater, a large public pool for swimming in the summer months, and a sand-filled beach volleyball area with a cafe. Further attractions include a pond, a skateboard/inline-skating area, and an ice-cream cafe. 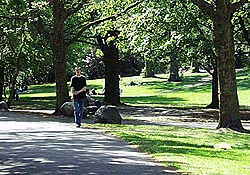 Volkspark Humboldthain is located in the district of Wedding. The park has two high points in the north and the south, with a valley in between. This is a popular picnic ground and walkers love it. During the summer, you'll also find the large public outdoor swimming pool quite busy with the locals.

The more touristy attraction of Volkspark Humboldthain is the remains of a WWII anti-aircraft flak embattlement still left on the park's northern edge. After the war, the bunker resisted all attempts at demolition and now the concrete behemoth is a lookout point with a majestic view of Berlin, especially towards the north. On top, there's also a monument to the German reunification. On the north side of the bunker, local mountain climbers have installed a technical climbing wall.

You should go, it'll be a great summer this year.

Might be a good chance that the Berlin version was inspired by it.

The photo of the park in Berlin looks remarkably like the Tidal Basin in Washington, DC, complete with cherry blossoms in bloom.

One day I'll get around to it!

Berlin has been on my 'must visit' list for a while - your photos & park descriptions make me even more keen to get there ;)

Berlin is a pretty sunny place in spring and summer as it's got an inland climate.

I love the fact that all the photos show brilliant sunshine!

I bet you they were fenced off. I remember seeing a lot of that back then. It would be so great to see Berlin now!

I'm thinking some of these parks may actually have been renewed in the last 20 years. On occasion, they're very close to where the wall was and may have been neglected / fenced off.

Hi, you know, I was in Berlin many many moons ago, actually right after the wall fell. And I don't remember all these parks. It's great to see that the green has come back to the city!