The Pyramids at Giza, Egypt 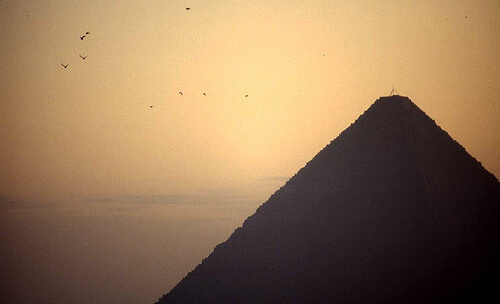 Probably one of the awe inspiring sights one can have is your first glimpse or the Pyramids at Giza, Cairo, Egypt. The last remaining seven wonders of the world The Great Pyramid or Khufu's Pyramid which towers nearly 40 stories high is at the site. That being said the pyramids are not the only thing on the Giza Plateau to see. Who can forget the Sphinx and all the mystery that this ancient statue has brought?

There also is the Solar Boat Museum, various mastabas(which are burial crypts), and the tombs of the workers as well as a light show.

When you visit the site and want to go into a pyramid, you need to know that only one pyramid at a time is open for preservation reasons. Depending on when you go will determine which pyramid you can enter. In addition, only a limited number of people are allowed to go in each day. If you decide to go in one it is an interesting experience and most people don't say this that the pyramid smells because of all the tourists who go in. Aside from that you might get a chance to see interesting graffiti from various centuries scrawled on the walls. It's definitely something to be missed if you are there.

There are plenty of hawkers around offering everything from postcards, souvenirs and camel rides. Just keep your wits about you when dealing with some of them because you can very easily be ripped off.

As far as the time the day to go ,early morning can be quite serene depending the season. You'll beat the heat and the crowds. Though anytime is still an amazing experience to see these ancient wonders.