The Sphinx at Giza, Egypt 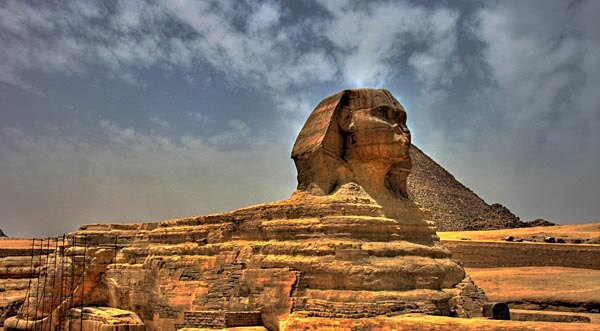 One of the most popular tourist attractions in all of Egypt, the Sphinx at Giza is the world's largest statue carved from a single piece of rock. It is also the oldest monumental sculpture known to man. Most historians believe that the sculpture was built between 2558 and 2532 BC. It stands more than 66 feet high, and is 241 feet long. Although the statue is most famous for its missing nose, it has also believed that the statue had and later lost a ceremonial beard.

There is a rich mythology surrounding the mysterious statue. Some believe that the Sphinx was once used to worship sun gods, while others think the Sphinx is a depiction of the Egyptian god Hor-em-akhet. It has been hypothesized that the statue was originally designed to have a lion's head. Not even the identity of the Pharaoh who ordered the statue be built is certain, although many believe it to be Khafra. The uncertainty surrounding the sculpture's origins is among the many reasons people have been intrigued by it for so long.

Over the years, many efforts have been made to restore the Sphinx. It has been excavated several times, and more extensive restoration attempts have been going on since the 1980's. However, the statue is made from soft sandstone, and the condition of the statue continues to deteriorate. Because of this, it is important for people to try to see this majestic statue while they still can. While there, visitors can also check out nearby sites like the three Great Pyramids, a Papyrus Institute, the Egyptian capital Cairo, and the local bazaars.