Visit the ruins of Arycanda in Lycia, Turkey 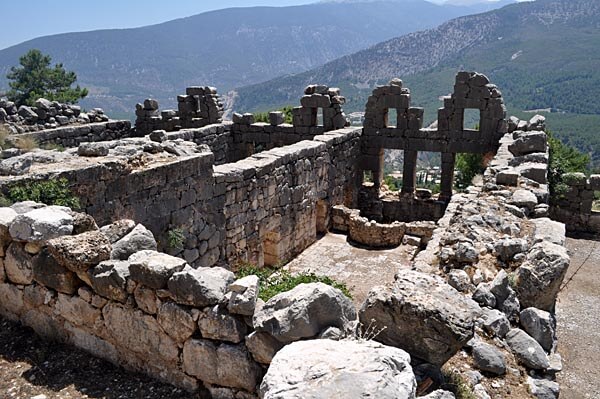 The Ruins of Arycanda are found very near the little town of Aykiriçay, which is located on the Elmali-Finike Road in Lycia, Turkey. Visiting this ancient site gives tourists a very clear picture of the lively life its former residents must have had. When you visit Arycanda, which is a recommended day trip from Antalya, you will see a city beautifully laid out on five terraces with an impressive view of the ocean and surrounding countryside. Citizens enjoyed a huge public bath, shopping, entertainment in an impressive amphitheater, and sporting events in a huge stadium with running track still intact.

This very civilized city had an impressive government building, or bouleuterion, where council members convened on row upon row of seats carved in stone. Additionally, two necropolises filled with ornate and interesting tombs received the dead.

Arycanda is a very ancient site, which some say may date back as far as two centuries before the time of Christ. Archeological digs in this ancient city have unearthed some of the oldest coins and artifacts in existence. Additionally, recent excavations and restoration work have brought this beautiful, well-preserved city into the light in a very impressive way. In ancient times, the city was well protected due to being located at a very high elevation.

It was hard for plunderers and robbers to get into the city. It was also difficult for any villains who succeeded in entering the city to get away with any of their spoils, so for the most part, Arycanda was left alone. In more recent times, the city was covered by landslides. This had the effect of preserving the ruins by protecting the ancient buildings from exposure to air. What you see now, when visiting, is a very well-preserved example of life in ancient times in Turkey.

Spending a day at the Ruins of Arycanda is a lovely trip to the countryside that provides a fascinating glimpse into the past as well as a very clear and awe-inspiring view of the beautiful surroundings of this ancient city.

The Arycanda ruins are located near the small village of Aykiriçay, on the Elmalı-Finike road in Antalya province in south western Turkey.