Shopping the Hippy Markets in Ibiza 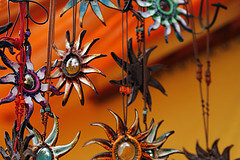 There are three hippy markets in Ibiza, which is the Spanish island off the coast of Valencia in the Mediterranean Sea. The island is a well-known tourist destination and especially notable for its nightlife and club scene that lasts from June to October. The hippy markets are popular attractions for visitors since the Sixties when artists, artisans and musicians began arriving on the island to enjoy the free atmosphere. The hippy markets offer many types of handmade items, jewelry, instruments and articles of clothing for sale from all over the world.

The largest one is the Es Cana. It is open from 10 am to 6:30 pm every Wednesday at the Club Punta Arabi, a unique resort for adults only. This market features over 500 stalls along shaded pathways among white bungalows.

On Friday mornings from 10 am to 2 pm there is a smaller hippy market in Playa d’en Bossa, near the island’s longest beach. The market is held at the southernpart of the Hotel Club Bahamas, which is welcoming to both adults and minors.

Then, at Las Dalias in San Carlos there is a hippy market every Saturday year-round from 10 am to 7 pm and in August it is also open on Sundays. In summer, from June to September, the market is open on Monday evenings and this evening market has a different flavor than the daytime market.

The evening market, open Mondays from 10 pm to 1:30 am from June to September and also on Tuesday evenings in July and August, offers live entertainment, mime acts, a Moroccan tea tent along with the usual artisan items of hippy culture that are for sale. San Carlos is a tiny village renowned for its population of artists, writers and musicians. It is now home to one of the island’s original hippy bars.

I have to see these place for some hippy indulgence=)

Sounds like it would make a great place to stop by to shop and enjoy the music.