Charming medieval architecture and an expansive 17th century canal system, present everywhere in the city center, both help to make cosmopolitan Amsterdam the jewel in Holland's crown. There are 400 bridges linking together streets packed with vibrant restaurants, bars, shops, café bars, and museums. With over 3 million visitors a year, Amsterdam offers something for everyone. 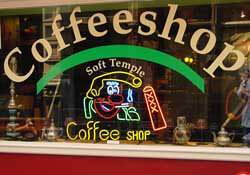 Amsterdam is one of the few places in the world where the use of soft drugs is legal or rather decriminalised is probably the correct term, it is legal to smoke marijuana in coffee shops only, and is not advisable to walk round the streets puffing away, most pubs/bars don't allow anyone to smoke marijuana at all on the premises, but as of the 1st July 2008 smoking in any public place in Holland (and including Amsterdam) is not permitted. How this will effect the tourist industry is yet to be seen. 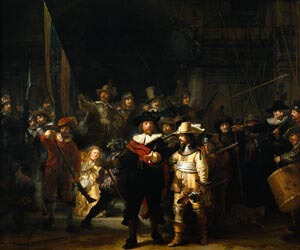 The Rijksmuseum possesses the largest and most important collection of classical Dutch art. It opened it's doors to the public in 1885. It collection consists of one million pieces of art. The artist most associated with Amsterdam is Rembrandt, whose work, and the work of his pupils, is displayed in the Rijksmuseum. Only one wing of the Rijksmuseum is currently open to the public, where the 200 most important pieces of art are on display. The museum will open again after the year 2010. The Rijksmuseum is being expanded, renovated and a new main entrance for the museum is being created.

Van Gogh lived in Amsterdam for a short while, so there is a Van Gogh museum dedicated to his early work.

Next to the Van Gogh museum stands the Stedelijk Museum. This is Amsterdam's most important museum concerning modern art. The permanent collection consists of works of art from artists like Piet Mondriaan, Karel Appel and Kasimir Malewitsj. 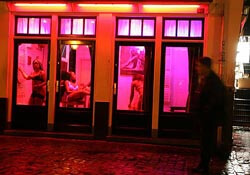 One of the largest tourist attractions by far is the Red Light District, with the Dutch having a very liberal approach on sex. There are over 5,000 prostitutes, the majority being female, of all nationalities working their trade in windows with soft neon lights illuminating the narrow streets and canals. Regular police patrols make sure the prostitutes stay safe, and they will not tolerate anyone abusing them. Also, the working girls don't take to kindly to having there photo being taken.

Eating and drinking in Amsterdam

The term ‘Dutch cuisine’ once tended to inspire peals of laughter. But well-travelled chefs have returned home to apply their lessons to fresh local, and often organic, ingredients. Transcending its setting on a land best suited to spuds, cabbages, carrots and cows, the nation is now employing its greenhouses to grow an array of ingredients.

But visitors should still take advantage of the traditional grub (the carrots taste all the better when you know that 17th-century Dutch royalists grew them for their orange colour).

Fish, gruel and beer formed the trinity of the medieval diet. But during the Golden Age, the rich indulged in hogs and pheasants, although apparently only after having these table-groaning meals painted for posterity – as the Rijksmuseum attests. But it was with Napoleonic rule at the dawn of the 19th century that the middle classes were seduced by innovations like herbs, spices and the radical concept that overcooking is bad.

If you prefer to stroll, here are a few tips. Rocket salad grows like weed in IJburg. Go to the Pijp if you crave econo-ethnic. Cruise Haarlemmerstraat, Utrechtsestraat, Nieuwmarkt, the ‘Nine Streets’ area and Reguliersdwarsstraat if you want something posher; and only surrender to Leidseplein – though we note some worthy exceptions – if you don’t mind being overcharged for a cardboard steak and day-old sushi.

Sure, check out the posh places, but quality and economic snack opportunities can be found in the form of fish, rolled ‘pizzas’ from Turkish bakeries, Dutch broodjes (sandwiches) from bakers and butchers, and spicy Surinamese broodjes from ‘Suri-Indo-Chin’ snack bars. And you really should visit an Albert Heijn supermarket to get an insight into Dutch eating habits

Before booking any hotels, I recommend that you read the article on getting the best hotel rates.

There was a time when hostelling in Amsterdam was synonymous with the cannabis counterculture - but the forthcoming smoking ban in July 2008 looks like putting paid to that. Instead, those on a budget might like to try an eclectic hostel housed in a former girls' school. Most of the 110 rooms — from pristine doubles to a 20-bed mixed megadorm with vaulted ceiling — have ensuite facilities, and the Stay OK caters to all age groups (not just students) and budgets with prices from €22 to €45 (£15.50 to £32) per person, including breakfast. What's more, it's a stone's throw from Amsterdam's nightlife central, Leidseplein, so there's no need to abstain from the party scene.

From the worn wooden tables, fading furniture and the original white-and-blue Delftware tiling along the staircase, you can tell canal-side pension Hotel Brouwer has been in the family for a century. As Dutch as it gets, the interior is infused with the respectable working-class ethos that built Amsterdam during the Golden Age. Canal-house hotels like this one (the building dates from 1642) tend to have very steep stairs, so it's worth knowing that the Brouwer has a small lift. There are only eight rooms though, so like everywhere else in Amsterdam, book well in advance. Prices range from €55 (£39) for a single, €90 (£63) for a double.

The brainchild of two sisters – one an hotelier and the other an intellectual and philosopher – the 38 philosophy-themed rooms at the Filosoof each have a life of their own. Designed with homely affection rather than serious artistic intentions, not every room is to everyone's taste. But if you're lucky (and book months ahead) you'll get a choice – from the monotone starkness of the Existentialist space to the cheesy cherubs of the Romantics' chamber. Room rates go from €100 (£70) to €120 (£84) for doubles, suites from €170 (£120). Even the Nietzsche room is kind of cosy; and there are now additional new suites in the second site across the road.

Book with Hotelscombined.com for the best rate

Finding a room with a view in Amsterdam's fabled canal belt is like seeking a sunny beach in Barbados – it's par for the course. Nevertheless, the Seven Bridges Hotel, a 18th-century merchant's house has a plum location along the city's most photographed waterway, the Reguliersgracht, with its line of seven charming little bridges. What's more, the hotel interiors are akin to stepping into the Antiques Roadshow; the owner is an avid collector and the eight double rooms and three studios are furnished with his treasured possessions, all for guests to use and enjoy. No bargain at €150 (£105) to €260 (£183) for a double, but very charming. 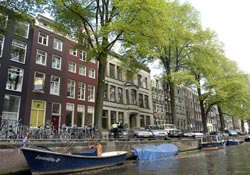 Flying to Amsterdam is the quickest and easiest way to travel, with all the major airlines offering great deals all year round. With the arrival of the low cost no frills budget airlines, fairs have been known to drop to as little as $2 plus taxes each way from England. With cheap flights like these on a first come first served basis, it's not surprising that Amsterdam is a popular destination. Flight times are just over 1 hour from all major UK airports.

Getting into the city centre from Schiphol airport is very straightforward with regular trains running round the clock and takes 20 minutes to arrive, just walk out of the arrivals door and down the escalators onto the train station (don't forget to purchase your tickets from the kiosk before boarding the trains). Catch a train to the city centre (Centrum). On arrival into central station you walk out of the main doors into the city centre, only to be greeted by the local form of transport (bicycle). Cyclists are everywhere, in part due to the narrow streets where cars struggle to fit, so often bicycles are the better option, while also being much more eco-friendly and wallet friendly in this very compact city.

First established in 1275, Amsterdam's golden age began in the early 17th century. Amsterdam became one of the wealthiest cities in the world. Ships sailed from Amsterdam to the Baltic Sea, North America, Africa and present-day Indonesia, ndia, Sri Lanka and Brazil, and formed the basis of a worldwide trading network. Amsterdam's merchants had the biggest share in the VOC (Dutch East India Company) and WIC (Dutch West India Company). These companies acquired the overseas possessions which formed the seeds of the later Dutch colonies. Amsterdam was the leading financial centre of the world at this time. Amsterdam's stock exchange was the first to trade continuously.

The city's fortunes declined after this, and it wasn't until the end of the 19th century that Amsterdam saw it's second golden age.New museums, a train station, and the Concertgebouw were built. At this time the Industrial Revolution reached Amsterdam.

Germany invaded the Netherlands on 10 May 1940, taking control of the country after five days of fighting. The Germans installed a Nazi civilian government in Amsterdam that cooperated in the persecution of Jews. Many Amsterdammers sheltered Jews at a high risk to themselves and their families and those that were discovered were also sent to the concentration camps. After the war approximately 120,000 Dutch were prosecuted as collaborators.

Today, the entire city center had been restored to its former splendor. Many buildings in the historic city's center are now monuments, the city's center as a whole is a protected area and there are plans to make the Grachtengordel (Herengracht, Keizersgracht and Prinsengracht) a new Unesco World Heritage site.

Hi Thomas, thanks for sharing that. Yep, Amsterdam certainly has a lot of amazing history and hidden stories. Have you considered writing a book about your experiences with the plot? I'm sure it'd be quite exciting.

Your story is very much informative, however you forgot to mention that Amsterdam, in the late 1980s and early 1990s was the city where several Surinam exiles lived and it is where there was a lot of planning done, to assist the rebels in Surinam (formerly Dutch Guiana) exiles plotted to bring down the military dictator (Desi Borterse),by using foreign mercenaries (such as myself) and others.

All of this occurred at a notable Amsterdam bar, by the name of Karl Appel, located in the red light district of the city.