Assisi - Medieval history in the heart of Italy 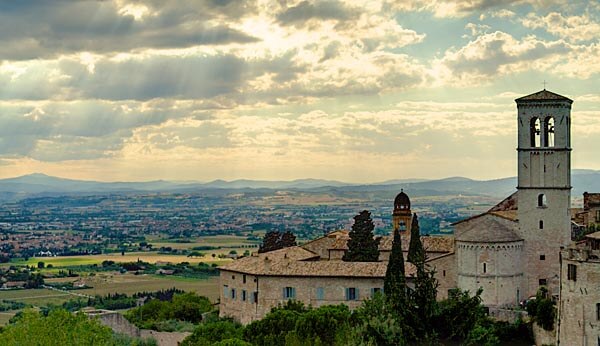 Assisi is a small mountain-side town in Italy. Compared to Rome or Florence, Assisi would seem fairly insignificant, just part of the Italian countryside. It has nothing to do with the great buildings, inventors or rulers of ancient Italy, so what is it about this commune that causes hundreds of people from all over the globe to make yearly pilgrimages there? Assisi’s historical importance lies not in great battles or the rise and fall of kings but in its status as a spiritual landmark.

Assisi’s origins began with the building of an Umbrian outpost around 1000 BC. The Umbrians kept their little city for a few hundred years, but in 295 BC a final battle - the Battle of Sentinum - was waged between the Romans and the combined forces of the Umbrians, Etruscans, Samnites and Galls. Rome won, uniting central Italy under her banner.

Assisi’s religious significance is traced to 238 AD when bishop Rufino originally converted her to Christianity. In 545 the Lombards took control of Assisi as part of the Duchy of Spoleto. In the 11th century, Assisi finally became an independent Ghibelline commune. There were several battles against the Guelph city of Perugia due to the conflict between the Pope and the Holy Roman Empire. The battle at Ponte San Giovanni was one such battle and it was during this that the young Francesco di Bernardone was captured. After having a vision while in San Damiano and losing interest in a worldly life and joining the beggars in Rome for a while, Francis again returned to Assisi and founded the Franciscan Order of monks, which was endorsed by Pope Innocent III in 1210. Later, one of his first followers, Clare of Assisi, founded the Order of Poor Ladies, a monastic order for women in the Franciscan tradition. Francis also founded the Third Order of Brothers and Sisters of Penance - a lay order.

Francis travelled to Egypt during the crusades in 1219 hoping to be martyred, but had to return to Italy to reorganize his monks there. Afterward, he withdrew from external affairs. In the first recorded case of the stigmata, Francis received the five wounds of Christ in a vision during a period of fasting and prayer. Two years later, in 1226, Francis died singing Psalm 141. In 1228 later he was canonized as a saint and the construction of the Papal Basilica of St. Francis of Assisi began. The remains of St. Francis have been laid to rest there. Also, some of the most famous fresco paintings in Italy are housed in the Upper Church portion of the basilica, including the Legend of St. Francis frescoes.

Assisi still sports a few remnants of Roman rule: the Piazza del Comune, city walls and the Temple of Minerva, now the Church of Santa Maria sopra Minerva are a few. However, the majority of pilgrims who make the journey to Assisi every year are not there to admire the Roman architecture or lovely countryside. They long to understand something of the lives of St. Francis and St. Clare. They want to feel the same Holy compulsion to accomplish massive Heavenly works on earth.

This is a guest post from Luke who writes about Assisi rentals and other interesting things to do in Italy. The photo is by NKCPhoto on flickr