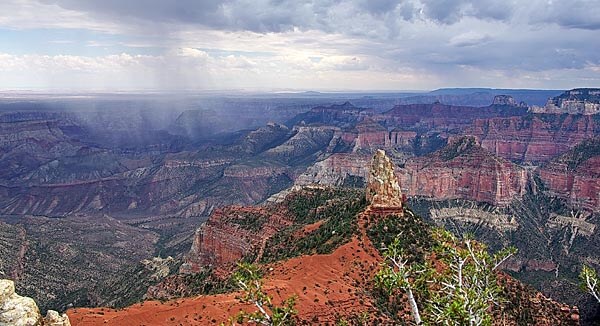 Close up, it is even more impressive; but if you fly in to Las Vegas, the pilot may point it out: A huge rift in the earths crust, like someone had taken a knife to the flat desert. This is Grand Canyon, one of the most impressive sights in the USA, and in the world.

The gorge was cut over several million years by the Colorado river on its way to Mexico, and exposes the geology of two billion years of history through the rocks it has cut through. The river continues to deepen the canyon, although geological changes are hardly visible on human time scales.

The canyon is not only home to an interesting geology, though. It also has a long history of human settlements, various Indian people building pueblos along the canyon walls. The first Europeans to find the canyon were the Spanish in 1540, but then it was left for the indigenous Indians until the mormon missionaries came in the 1820's.

It is really the vista of the canyon that is most impressive, standing at the edge and looking down towards the river glinting in the depth below, two billion years down. But the canyon is also a national park, and it is possible to go camping and rafting in it, not just visiting. That requires a reservation, however.

Today, most tourists visit the South Rim, where there are not only historic buildings and the ranger complex, but also a viewing balcony stretching out over the canyon itself.