The home of Betsy Ross, Philadelphia 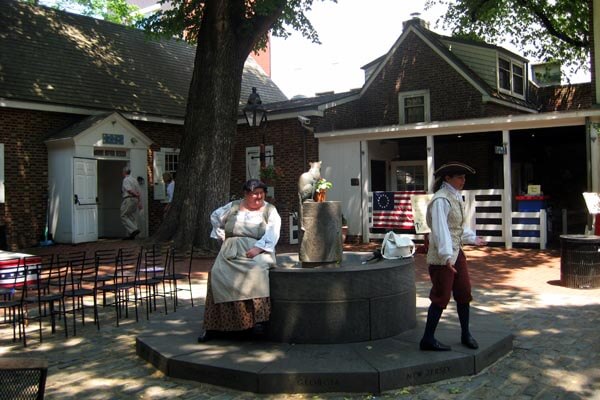 For visitors to Philadelphia, Pennsylvania, a trip to the home of Betsy Ross can be interesting for visitors both young and old. It is widely believed that she made the first American flag during the Revolutionary War. Betsy was a young married woman when the war broke out and her husband was killed in an explosion of gun powder. Having been taught to sew by a great-Aunt, she began work by repairing soldiers’ uniforms, making tents and stuffing musket balls into cartridges for the Continental Army. It is rumored that in 1776, after the Battle of Mount Holly, the beautiful young widow entertained a Hessian colonel long enough to keep his forces from engaging in the Battle of Trenton.

General George Washington’s troops then crossed the Delaware River and captured almost the entire Hessian garrison. Thus, at a time when morale was at a low point, the victory was an inspiration for the Continental Army. In 1777, Betsy married her second husband who was a seaman. They had two daughters, one of whom died at nine months of age. Captured by the British, her second husband died in jail. Betsy was married a third time in 1783 and had five daughters. When her second daughter in the marriage was born, the couple needed larger quarters and moved to another house. However, the house where she is said to have been living with her first husband, John Ross, when she fashioned the original American flag is at 239 Arch Street, which is near Independence Hall and the Liberty Bell. The structure is now almost 300 years old.

After Betsy moved from the house, the building was used by a variety of businesses and artisans for many years. One of the later owners placed a simple sign on the outside that noted “First flag of the US made in this house.” In the late Nineteenth Century, most of the adjacent buildings had been demolished and replaced with modern structures. It was feared that the same fate awaited the Betsy Ross House, so a group called the American Flag House and Betsy Ross Memorial Association was formed. They raised enough money to purchase the home, restore it and open it as a public museum in 1898.

Betsy and her third husband are now buried on the grounds. Furnished in the period when she lived, there are seven rooms for visitors to see, a kitchen, the bedrooms, parlor and a replica of the upholstery shop. The furnishings include period antiques and reproductions of her belongings and her family’s. Even her eyeglasses, her petticoat and her Bible are on display. There is a lovely courtyard for visitors to sit and relax with soft drinks and hot dogs and to listen to story tellers and see workers making colonial crafts. The house is surrounded with the sights and sounds of the Revolutionary War period and should be a must-see for anyone interested in American history.

Admission is $4 for adults, $3 for children.