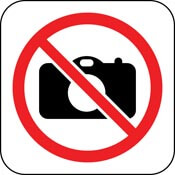 An Austrian architecture fan was stopped by Metropolitan police for taking photos of London's Vauxhall bus station which he appreciated as a work of modern art. The 69 year old Klaus Matzka, who was together with his son at the time, were stopped on the spot, interrogated, forced to delete the photos they'd taken, and their personal and passport details taken down by the police officers.

I'm passionately against any limitations on the photographer's right to take photos in a public place, and as I've written before, the new laws in the UK giving police the right to stop photography in the public arena are pretty much guaranteed to create abuse. In this case, the photos in question were even forcibly, and illegally, deleted from the tourists' cameras.

From the Guardian article, there's a statement that neatly sums up where these laws have gotten us:

In a telephone interview from his home in Vienna, Matka said: 'I've never had these experiences anywhere, never in the world, not even in Communist countries.'

In a public statement, the Metropolitan Police said they don't know of any ban on photographing public transportation in London. That's because there is none.

There's a clear lesson here: When traveling anywhere in the world, know your rights as a photographer. Here are a few resources:

If you know of any resources regarding the right to take photographs in public spaces for other countries, please leave the web address in the comments below and I'll add a link.