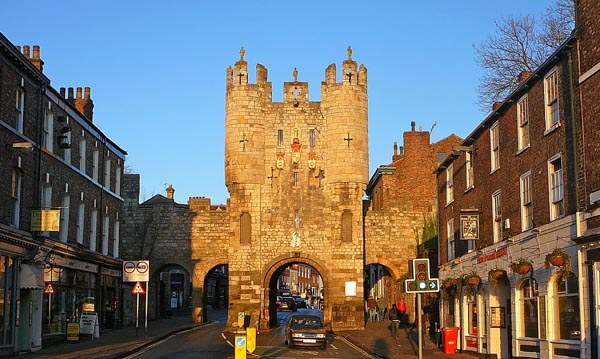 Ever since the time of the Roman Empire, the city of York, England has always been a hub of English business and politics. As a result of its political and strategic importance, the Town’s Roman occupiers felt the need to construct walls around the city’s environs as a defensive measure. The walls were destroyed and rebuilt over the centuries, but always remained a fixture in the city. And interspersed within this walled city were four gatehouses that regulated access to the city. Known as Bars, these four entrances provided not only additional defense during war time but also provided revenues from collected tolls as these bars were the only way in and out of York. Located in the city’s south side on Micklegate “the Great Street” the four-story Micklegate Bar is easily the most famous of York’s Bars.

As the gateway for monarchs and royals and the final resting place of rebels - Micklegate Bar has borne witness to many fascinating events since its original construction in the 12th century. Beyond providing defense during the War of Roses against the Lancasterites, the Micklegate Bar oftentimes acted as the focal point of important civic events and even hosted the severed heads of those aforementioned rebels and traitors including Richard, Duke of York and Henry Hotspur Percy. The Micklegate Bar, now long past its usefulness as a fortified gatehouse, serves as an ancient monument harkening back to those medieval times ready to educate the many visitors to this charming city.

The Micklegate Bar Museum, a quaint, interactive meeting place where visitors may experience what life at the Micklegate Bar was like, now sits where the gatehouse once stood. The museum offers its guests a rich education in the history of York as well as the Micklegate Bar itself. Visitors to the Museum may pretend to be armored gatekeepers and features a documentary about York’s role in the famed War of the Roses, including the “bloodiest battle to ever take place on English soil,” the Battle of Towton. Children and adults alike will enjoy spending an hour or two learning about the Micklegate Bar’s rich history (and trying on the helmets and period clothing).

With continuously rotating exhibits and events on its hallowed ground, come visit the Micklegate Bar and learn about what life was truly like in the medieval times.