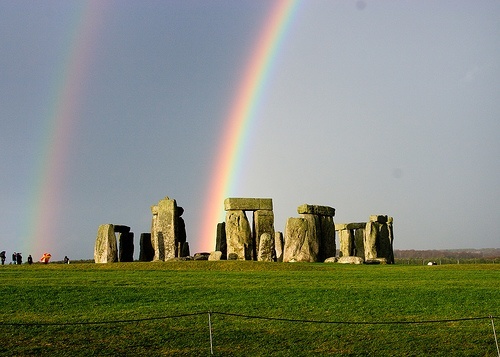 "In ancient times, hundreds of years before the dawn of history, an ancient race of people... the Druids. No one knows who they were or what they were doing..." (This Is Spinal Tap)

The mystery keeps people coming back year after year to Stonehenge, the most famous of rock circles. It is after all a circle made of rocks, so there must be something special about it for it to be so popular. Many believe it has certain powers, healing abilities. Others believe that it was an ancient clock. Archaeologists say it is Neolithic, and they discover new things about it all the time. In world mysteries, the reason and purpose for Stonehenge ranks right up there with the lost city of Atlantis, and Nessie. 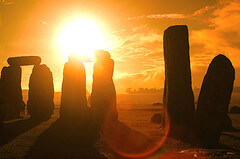 If you look up Stonehenge you will find many tours which go there and which take many other people there, so it will be crowded. You will wait in a line and enter through a turnstile, after paying your £6.60 (for adults). Then you will see it, the mystery itself. It is pretty impressive, even if you are following others around in a circle and can't touch it because erosion was starting to take its toll. Call the people in charge to find out about private openings for a more intimate experience, or go on an equinox or solstice when they open it up for celebratory and religious reasons.

A trip to Stonehenge is worth it, whether you believe in ley lines - lines of energy and magic which run across the world and intersect at many ancient sites - or you just want to know why those who built it (the Druids?) went to all that trouble in the first place. It is something to see and a good value if you are visiting England. If you're in the area, you should also not miss the Avebury Stone Circle, which is close by.

Stonehenge is open every day of the year except Christmas Eve and Christmas Day. Opens at either 9 or 9.30 am and closes at 6pm in summer, and 4pm in winter.

For me Stonehenge is an amazing place, it has is own mystical atmosphere, visit the site is just a unique experience