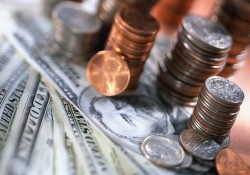 Saving money abroad can be a lot simpler than the usual advice. Rather than obsess over the right season to go, which country is the cheapest right now, and so on, simply change how you get and manage your cash for some real travel savings. These tips work whether you're staying in a London hostel or basking in luxury at the Four Seasons Hotel George V in Paris.

It’s possible to cut costs on getting around. Autoeurope, for example, guarantees car-rental rates in dollars. Eurostar usually charges far less if you purchase your rail trip on the United States web site. Right now, a three-day London to Paris trip on the U.S. site goes for $424, the same trip from the UK site was $654. Try Kayak for cheap airfare after you read our tips for cheap airfare here.

Cash machines are still the best way to lay hands on local currency, if you can get around the outrageous fees. Some U.S. banks have upped their flat rate of $2 per withdrawal to $5, or added a conversion surcharge, or both. Check to see what your bank levies before leaving home, and before making a withdrawal (you can find a list of costs at Bankrate.com). UK banks do much the same, and the various fee types are discussed at Moneysavingexpert.com.

Even if your bank has substantial fees for withdrawals, many banks now work with foreign partners and allow customers to take out money at no charge. Bank of America imposes $5, plus 1 percent of the withdrawal amount, at unaffiliated overseas ATMs, but nothing at those of partners like Barclays, BNP Paribas, and Deutsche Bank. Some banks, such as Citibank, have their own branches in Europe. Nationwide in the UK has a debit card that allows foreign withdrawals and purchases without surcharges.

Use credit cards for larger purchases

Using your travel credit card abroad often gives you the lowest exchange rate and protects you from unauthorized charges. But the fees are often the same as those on the issuer’s debit card. Only a select few cards don’t charge extra, so it pays to check before you travel. Or, consider opening an account in Euros, Sterling, or US Dollars to escape transaction fees altogether. Lloyds TSB Offshore or HSBC Premier are two options.

Travelex currency exchange kiosks (located at most airports) provide a lower service fee for larger transactions. For example, a $100 exchange has a feee of 6 percent, and for sums over $500 it's about 1.5. Some companies (Travelex and Marks & Spencer) have 'buy back' programs, letting customers sell leftover currency at a favorable rate while often waiving the service fees. This means you won’t have to use up your leftover money on duty free chocolate bars!

Often, a merchant will present a credit card bill for purchases abroad in your own currency, rather than the local money, as a convenience to the customer. However, as he’s free to use any exchange rate for the transaction, you'll probably end up losing money. Many travelers aren’t aware that they can turn down this service. It’s generally safer to buy using the local currency and letting your credit card company do the currency conversion.