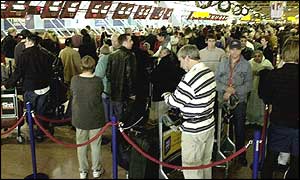 We all spend more and more time in airports, and here are the ones you should avoid if at all possible.

This is definitely more than a little unscientific, but the New York Times rated the worst European airports as follows:

And AvoidDelays.com listed the worst U.S. airports a little while ago as:

Gadling.com added their list of worst U.S airports as well, both by general suckiness, distance to the city center and difficulty of public transportation. Here are their picks:

So, if you're looking to have a nice travel experience by plane, shoot for an itinerary which doesn't involve any of these airports. Now, given these lists, that would seem somewhat difficult while in the U.S.A as these are among the world's largest and busiest airports. We'll shortly be adding even more airports to these lists!

Other areas of the world

Of course, the airports in Moscow, Kazakhstan, Pakistan, Lagos, and similar places are pretty bad too. But since we expect them to be absolutely horrible airports, it's somewhat easier to deal with. Unless, of course, you end up getting bumped and have to stay the night at some fleabag hotel.

And this begs the question, which is the best airport in the world? Hong Kong International airport.

Share your horrible airport experiences in the comments below.

Frankfurt airport is AWFUL. Not enough seats for passengers (old, disabled people were in pain laying on the floor), no internet except for nine million Euros a minute metal pay machines, nothing comfortable, just a horrid, cold, bland machine of an airport. Nothing human about it at all. The management of Frankfurt AM should visit Changi in Singapore.. I'm sure they'll be so shocked and in awe they'll ask where everyone paid for the (free) internet, couches, free 3D cinemas, massage machines, beautiful service etc. I PURPOSELY avoid Frankfurt AM now, I choose a different option, if it means a different airline, so be it! Listen to the passengers Frankfurt management - You've been voted among the worst in the world with NIGERIA! Sack the management, start again.

Apparently Frankfurt is a nightmare to change at as you have to re-clear security. Or something... The NYT article wasn't too clear on why people hated it so much. I'll find out in a month though, as I have a business trip coming up to Germany.

Frankfurt's an odd choice for a "worst airport". I've arrived and departed from there after many a long-haul flight from Australia, and can't say that I have any complaints. I particularly liked the seats that are designed for travellers to stretch out on while they wait.