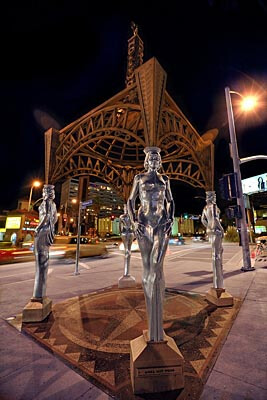 Hollywood, California is a favorite vacation destination with many things to see and do such as Grauman’s Chinese Theater, the Kodak Theater, the Hollywood sign on the hill side, and movie studios and stars. One thing not mentioned frequently is the Hollywood Goddess Gazebo which is located at the west end of the 3.5 mile Walk of Fame.

This gaudy silver gazebo features four legendary screen actresses supporting an Eiffel Tower-like gazebo over head. The statues represent Dolores Del Rio, Dorothy Dandridge, Mae West and Anna May Wong. In the area above the arch way on all four sides are the letters reading “Hollywood.”

The gazebo is definitely an eye catching sight and some of the residents of Los Angeles find it to be a piece of “hideous” public art that “makes your eyes twitch”.

If you walk east for 1 mile from the gazebo you will be at the star of Michael Jackson and the Kermit the Frog statue, to mention just a couple famous people’s stars.

Yes, the Hollywood Goddess Gazebo if something for you to see when in the L.A area.

The statue is in the public streets of Hollywood, so go see it for free anytime.