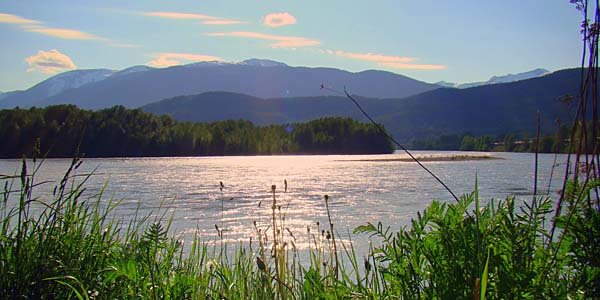 Known as the “River of Mists,” the Skeena River offers a treasure trove of delights for the outdoor lover. The second longest river to run completely within British Columbia, it is a vital element in the lives of the native populations and others who live within its watershed.

What may be of more interest to the sports-minded individual, however, is the fact that the Skeena is home to vast numbers of of salmon, including chinook, chum, coho, pink, sockeye and steelhead. In fact, it holds the world record for chinook: a gargantuan fish of 92.5 pounds has reportedly been taken from the river. Fly fishers from all over Canada – and well beyond – descend every year for both guided trips and independent forays into the Skeena wilderness.

The Skeena, unhindered by dams, runs for more than 500 miles through largely undeveloped territory before finally meeting up with the Pacific Ocean at the Dixon Entrance. A number of fishing and outdoor sports companies offer charters – just Google “Skeena River fishing tours” and you’ll find a wealth of expert fisherfolk offering their services to anglers. You can also find outfits offering river rafting tours and there are many pristine campgrounds in the Skeena River Valley area. Just be aware that while camping you may be treated to the sight of a black bear coming down to the river in the evening, and other wildlife abounds in the region as well.

If you’re interested in fishing the Skeena River, we recommend that you plan your trip for the summer months. With an estimated five million salmon running the Skeena each year, you’ll find the coho starting to run in July, with the others following. Peak times are in early autumn. There are visitor centers at various points on the roads leading to the river, where you’ll be able to find further information on fishing conditions at that locale, as well as lists for local guides and outfitters.

What a beautiful photo and good description of the Skeena River region!