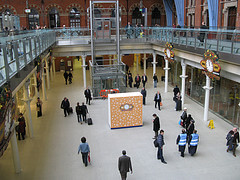 King's Cross Station, opened in October 1852, and is currently being restored and expanded in order to accommodate the 47 million annual passengers who pass through it. More recently, King's Cross Station has become famous as the departure point for Harry Potter and his fellow Hogwarts students. There is even a spot with a sign reading "Platform 9 ½" on a wall with a luggage trolley halfway through it where you can take a picture like your favorite wizard.

King's Cross Station is a departure point for trains that can take you to points throughout the United Kingdom. It is served by four train companies, including First Capital Connect, First Hull Trains, Grand Central, and National Express East Coast.

The King's Cross tube station is one of the largest in London, which the following lines stopping here: Northern, Picadilly, Hammersmith and City, Circle, and Metropolitan. This makes King's Cross a junction for nearly the entire city.

For connections to other parts of England and Europe, St. Pancras train station is right next to King's Cross.