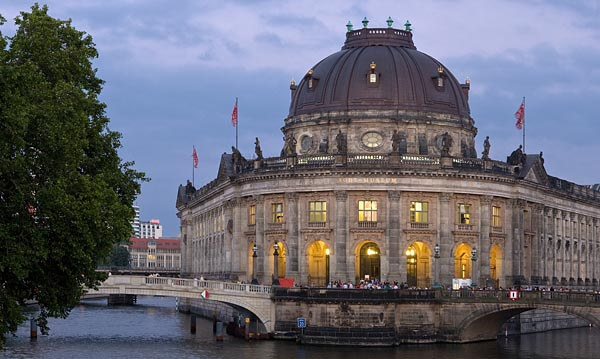 Berlin, a network of many islands and peninsulas, is home to one island that no visitor should miss. Called Museumsinsel (Museum Island), this small island boasts five world class museums. The island was declared a UNESCO National Heritage Site in 1999, and has been labeled “a sanctuary of art and science.”

The five museums include the Alte Nationalgalerie, the Altes Museum, Neues Museum, Bode Museum, and the Pergamon museum, and they feature collections of fine art, Egyptian antiquities, and dramatic artifacts from the Middle East. Prior to German reunification, many of the priceless collections were scattered, lost, or in storage, so assembling these museums has been a difficult labor of love for the people of Berlin.

Certainly one could spend an entire day or more roaming through the vast museums, but if pressed for time, the Pergamon Museum should be the first stop. Instead of mere artifacts, the museum has reconstructed actual archaeological remnants from the ancient world, transporting visitors to another time and place. The Pergamon and all other museums on the island are open daily, but check with your hotel for the most accurate hours and rates, as these change season to season.

Nice picture, I think that Berlin is really a nice place to go for holiday. Thanks for sharing.