Anyone who has spent any time in San Francisco recognizes the distinctive chimes of the cable car as they traverse the hilly streets between the waterfront and Union Square. While most San Francisco residents only use the historic cars occasionally, the antique vehicles are a symbol of the City by the Bay and a must-see for anyone visiting.

Although the cable cars are largely a tourist attraction today, they were once a vital part of San Francisco’s transportation infrastructure. Routes traversed the city, allowing residents to easily travel to work or school. While the routes have decreased significantly in number, the cars still provide a valuable service.

When Andrew Hallidie, the inventor of a wire rope used during the Gold Rush of 1849, witnessed a horrific accident involving horse-drawn wagons, he realized that he could use his product to create a safer and more efficient means of transportation on the hilly streets of San Francisco. Within four years, he was testing his idea — using cars that gripped the cables and were controlled by an operator using a hand brake — on the first line, the Clay Street Railroad.

Over the next 50 years, more than 20 independent lines began operating around the city; however, the development of the electric streetcar — and the earthquake of 1906, which destroyed a number of lines and cars — began the decline of the cable car. By the late 1950s, only the three currently operating lines were left, despite efforts by many to save the cars. Today, the cable cars are a registered historic landmark and the only moving national monument in the world.

Although there are many things to do while you are in San Francisco, no trip would be complete without at least one ride on the fabled cars. There are three routes to choose from, all of which connect popular tourist destinations. Cable cars on the Powell-Hyde and Powell-Mason lines begin and end at turntables; both of the Powell lines begin at the Powell-Market turntable near Union Square. The Powell-Mason line runs over Nob Hill and down to Bay Street at Fisherman’s Wharf. The Powell-Hyde line also runs over Nob Hill but takes a different route and ends at Aquatic Park near Ghirardelli Square at Fisherman’s Wharf. The third line, the California Street line, runs from the Financial District through Chinatown and over Nob Hill to Van Ness Ave. If you just want to take a ride and aren’t planning to get off anywhere along the way, take either route; however, if you have a specific destination in mind, pay attention to the route map and choose the right car. 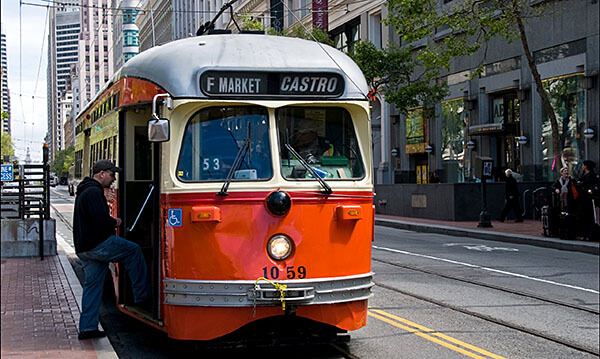 You can board a cable car at any of the turntables, or at any stop marked by the distinctive brown-and-white sign. The sign will indicate which route you’ll be boarding.

If you want to ride the cars one way, a ticket is $5.00; kids under five are free. If you need round-trip transportation, or want to ride the street cars and buses as well, a pass is a more economical option. You can purchase one-day or multi-day passes.

When you board the car, wait until it stops — don’t try to get off until it’s come to a complete stop. Take a seat if there is one, or hang on to the poles on the outside of the car to stand. Just hang on tight and watch out for hazards like parked cars.

While a ride on the cable car is enjoyable, if you want to learn more about the history of the cars and the city of San Francisco, visit the Cable Car Barn and Powerhouse on Mason Street, where you can view exhibits on the cars and the actual cables that operate the cars.

San Francisco’s cable cars are as much an icon of the city as the Golden Gate Bridge or Alcatraz Island. So when you hear the bells chiming, consider the history of the cars and how these enduring symbols were nearly gone forever.

About the Author: Contributing writer Matt Strathairn is originally from Vancouver but now calls California home. He is working on a novel set in turn-of-the century San Francisco and has spent a great deal of time researching and exploring the city. You can learn more about American travel with TripStates.