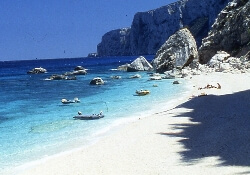 TripAdvisor®, the world's largest travel community, today announced the results of its annual travel trends survey of more than 3,000 U.S. travelers. The primary trends identified are that travelers appear to be going lean and green by visiting national parks, hiking, and engaging in adventure activities. A greater amount of Americans said they will be environmentally conscious in their travel decisions in 2009, and more plan to visit eco-friendly hotels in the coming year.

TripAdvisor also unveiled its TravelCast list of emerging hotspots for 2009, and atop the list is Budoni, in Sardinia, Italy. The top emerging hotspot in the U.S. is St. George, Utah.

Park is the place

Sixty-six percent of U.S. respondents said they will go to the theater in the coming year, compared to 58 percent last year. Eighty-seven percent said they will visit an historic site, up from 84 percent in 2008. Thirty-six percent will engage in an educational activity on vacation, up from 34 percent a year ago.

Germs on the brain

Eighty-three percent of U.S. respondents are concerned about germs, bacteria and viruses when traveling. Airplanes are considered the most "germy" by 34 percent of respondents, followed by public transportation, and hotels. Sixty percent of travelers surveyed said they wash and disinfect their hands more often while traveling than they ordinarily do.

Eighty percent of respondents said they tip for room service, while only 59 percent tip the chambermaid. When asked who they think doesn't deserve a tip, the greatest percentage, 26 percent, said the concierge, as well as the doorman. Twenty-six percent said they avoid the bellman and the skycap, to bypass tipping them for their service. Fifty-eight percent of U.S. respondents said they normally tip 20 percent on restaurant bills, while 33 percent tip 15 percent.

Sixty-one percent of travelers said the cost of fuel is an important consideration when choosing where to go on their next vacation. Eighteen percent of respondents said they will take more car trips this year because of declining fuel prices.

Forty-nine percent of those surveyed said they have had more trouble booking desired flights in the past 12 months, than they did the previous year. Seventeen percent said they had a flight canceled this year because their route or flight was permanently eliminated from their carrier's schedule. The number one traveler faux pas according to those surveyed is a child kicking the seat back, according to 30 percent, followed by rude seat recliners and loud talking on cell phones on flights at 19 percent, respectively.

Flying with cell phones, wi-fi, and a view

Eighty percent of U.S. travelers think cell phones should be banned on flights. Sixty-nine percent of travelers want wireless internet access on airlines, but only 14 percent are willing to pay for the privilege. When asked what they can envision airlines charging for in the future, 50 percent predicted a window view.

No babies on board

Seventy-one percent of travelers surveyed think families with young children should sit in their own section of a plane. Thirteen percent think airlines should prohibit parents from flying with infants, except in the event of an emergency. Thirty-seven percent would pay extra to sit in a quiet section of an airplane, and of that group, 38 percent would pay as much as a 6-10 percent premium.

Thirty-seven percent of travelers surveyed said they will vacation at a rental property in the coming year, up from 34 percent last year. Only one percent of respondents have done a vacation "house swap" but 43 percent would, if given the right opportunity. For a great experience with vacation rentals, try HomeAway.com, Holiday-Rentals.co.uk, or Ownersdirect.co.uk.

Fifty-eight percent of travelers are brand loyal when it comes to booking hotels. The hotel brands to which the greatest amount of U.S. respondents are loyal are Marriott, Hilton, and the Hampton Inn.

The favorite airlines, according to U.S. respondents, are Southwest, American, and Delta. These airlines were selected as the best, primarily for their friendly and helpful staff, good on-time arrival and departure record, and best fares. U.S. Airways was the least favorite, according to the survey.

The top airports, according to the survey, are Orlando International, Las Vegas, McCarran, and Amsterdam, Schipol International. Eighty percent said the most important factor in making an airport great are clean bathrooms. Chicago O'Hare was the least favorite airport, according to respondents.

TripAdvisor™ TravelCast is a barometer of what's hot in travel destinations. TripAdvisor engineers have developed a proprietary algorithm that looks at several criteria including changes in search activity and postings throughout the world's largest travel community, Tripadvisor.com. The TravelCast then predicts the rising stars in travel. The top three emerging world hotspots for travel are Budoni, Sardinia, Agia Galini, Crete and Petra, Jordan. The complete world and U.S. top ten lists are provided below.

"An emerging trend is travelers getting greener. They plan to be more environmentally-conscious, and will be more active outdoors this year, taking advantage of some of the outstanding resources in the U.S., such as our beautiful national parks," said Michele Perry, vice president of global communications for TripAdvisor. "For those interested in going farther afield, TravelCast's top emerging world destination is Budoni, Sardinia, a breathtaking beach destination in Italy."