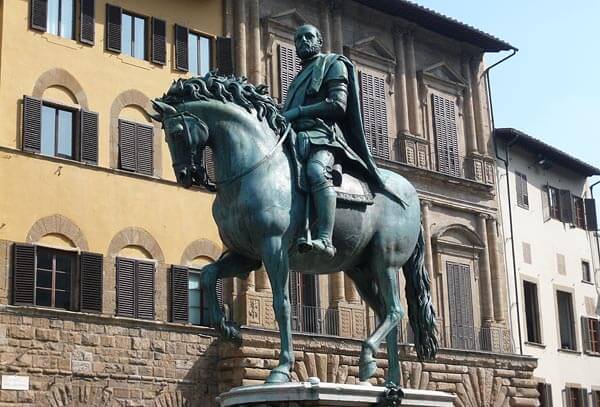 The Leaning Tower of Pisa is a well-known tourist attraction, visited by millions. But, what else can one do while in Pisa, Italy? Pisa is filled with places of interest. Explore the churches, wander through the museums, and enjoy shopping and dining. Pisa is in central Italy, in Tuscany. It's strategically located on the banks of the Arno River on the Ligurian Sea. One point of historical significance definitely worthy of attention is Knight's Square, also called Piazza dei Cavalieri. Knight's Square is part of the Santa Maria Quarter.

In Medieval and Roman times, Piazza dei Cavalieri was the center of political life in Pisa. It served as the city's Forum during the Roman Empire. Although Knight's Square dates to the 1100s or even earlier, it is best known for the architecture of Giorgio Vasari, who was commissioned by the de'Medici to redesign the plaza during the Renaissance. Cosimo I de'Medici created the Order of the Knights of Saint Stephen and had the square redone to give the space a noble stature. A statue of Cosimo was erected in Knight's Square in 1596, commissioned by his son. The plaza is a vast, paved open space, surrounded by fascinating buildings. It is now home to Pisa's most esteemed university, Scuola Normale Superiore, which was established by Napolean Bonaparte.

If you stand in the center of the square, you will see why it is sometimes referred to as Piazza delle sette Vie, or square of the seven streets. If you close your eyes, you can imagine Galileo Galilie strolling the square on his way to teaching a mathematics class. Pisa is Galileo's hometown.

One of the most famous buildings in Knight's Square is the Palazzo dell'Orologio, Palace of the Clock, which now houses the University Library. The clock tower connects two Medieval towers, one of which is part of an infamous historic event. In the 1200s, prominent Pisan citizen Count Ugolino was involved in political intrigue which resulted in his arrest. He and his family were supposedly locked up in the Torre dei Gualandi and left to starve. Legend has it that the Count went mad and consumed his granddaughter. The episode is featured in Dante's Inferno and is the reason the tower is more commonly known as Torre dei Fame, or Tower of Hunger.

The most prominent building in Piazza dei Cavalieri is the Palazzo della Carovana. Originally known as the Palace of the Elders, the building was renovated by Giorgio Vasari to be the headquarters of the Knights of Saint Stephen. The marble facade is magnificent, featuring sculptured busts, the Medici coat of arms, zodiac representations, and allegorical statues. The building is now the center of the University. In its halls hang paintings from the 1500s.

Another building built by Vasari is the Church of the Knights of Santo Stefano. It is made of marble and sandstone, and the impressive facade was designed by Giovanni de'Medici. A statue by Donatello resides in the church. The other buildings in Knight's Square include another church, the Oratorio di San Rocco; the Palazzo della Canonica, which nicely balances the Palazzo della Carovana; the Palazzo dell'Ordine dei Cavalieri; and the Collegio Puteano.

Knight's Square has had an ever-evolving history, from its beginnings in the Middle Ages as a town civic center, through the Renaissance and its affiliation with the de'Medici family, and now a center of learning. The square lies in the heart of historical Pisa, and it is close to many other Pisan points of interest, including the oldest botanical gardens in Europe, and Piazza dei Miracoli – Miracle Square, the home of the Leaning Tower of Pisa.